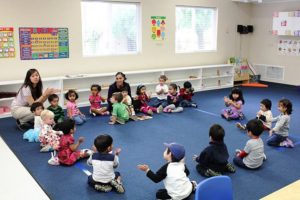 That means that wherever you are in Fremont your child is going to be in a large class, and that in turn means that teachers simply cannot give any child individual attention. Then there is the rigidity of the hours. A large proportion of early education programs in the State are part-day. Even a so-called full day program of six hours is insufficient to meet the needs of most working parents.

Another problem is that of the summer. This year, 2019, public kindergarten closes on May 17th and doesn’t re-open until August 27th. That’s probably not a problem if you can take about 15 weeks off work in the summer, but for most parents that’s not the case. In fact, even if you run your own business, you probably can’t afford to take 15 weeks off work. You most likely take less holidays than someone who is an employee.

There are 24 million children in the US aged five or younger, and of those, 3 million live in California. Stanford University has undertaken research on these matters (https://gettingdowntofacts.com/sites/default/files/2018-09/GDTFII_Brief_EarlyChildhood.pdf) and has found that, among other things, children attending a high-quality preschool and kindergarten do better in school and in life. It also found that the State of California has twice as many children as the rest of the US who are first or second-generation immigrants and live in families who are not fluent in English. On top of that, 60% of child-care workers rely on some form of public assistance because the wages are so low, which means that these public schools are not going to attract top-class teachers.

So Many Parents Searching For Fremont Private Kindergarten

This is why so many parents are searching for Fremont private kindergarten in order to get their child off to the best start in life. Finding the fees may mean that some have to cut down on little luxuries, but many parents are willing to make that sacrifice in order to afford Fremont private kindergarten and give their child a much better early education.